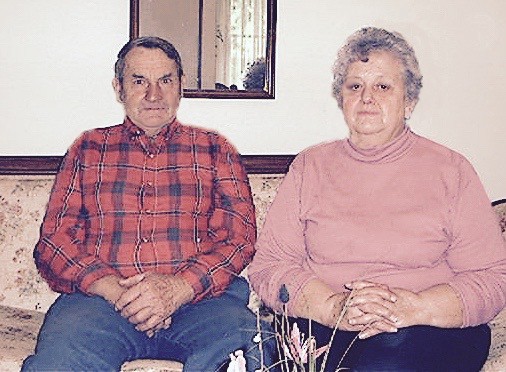 Dorsey and Louise Thompson provide much detail about life on the Little River to Radford University students, Ashley Robbins and David Jones during their 2002 interview. Dorsey says he would choose Floyd over any other place and Louise feels the same, “We raised our five children out here, and they had the whole place to roam around.” Dorsey’s favorite place would be in the garden pulling weeds and harvesting vegetables. Mr. Thompson relates stories of floods, with Hurricane Hugo causing one of the worst, of the frozen river in wintertime when he could ice skate, and of droughts, historical and current. When asked about a favorite memory of the river, he notes, “Well, when I was a growing up, I used to do a lot of swimming in it. Especially when we were hoeing corn, getting hot, and my brothers and myself, when Dad was gone, we’d take a swim occasionally.” Now, Mr. Thompson, who built the successful Thompson beef cattle operation with about 800 head, has passed the farm business on to his sons.

A beef cattle farmer for many years, Dorsey Hale Thompson, son of J. Murphy and Annie Thompson, lives and works on the land bordering the Little River where he grew up. He and his wife, the former Mary Louise Poff, raised five children here. Louise also has Little River connections, having been born and raised at the source of the river, near Head of the River Church. Mr. Thompson served two years stationed in Germany, after World War II during the occupation.  His extensive community service also includes the Bank of Floyd board, Citizens Telephone Cooperative board, Agricultural Soil and Conservation Services committee, and the Virginia Farm Bureau board.

The Little River oral history series was directed by the Floyd Story Center at the Old Church Gallery, where the complete archives are held. Dorsey and Louise Thompson’s interview was conducted by Radford University students David Jones and Ashley Robbins. The project was guided by a collaborative community-university partnership under Radford University anthropology professor Dr. Melinda Bollar Wagner, whose students collected a wealth of place-based interviews. Generations will be enriched by the recordings of all who shared their memories. Thank you all.