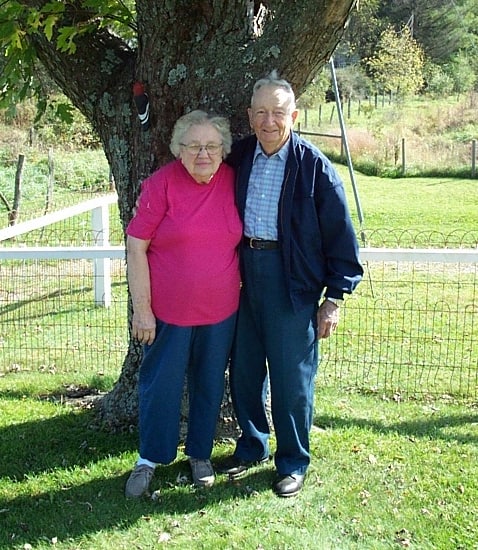 Carl and Mae Dobbins, both born around 1918, have lived on the Little River for over five decades. Carl’s sister, Iva Bower, joined them for this interview. Carl has fished here his entire life, but rampant growth of the multi-flora rose now makes it difficult to get to the riverbanks. In his youth, he would seine for fish when it was muddy and gig for frogs at night. Carl thinks that fish population has decreased due to the dam and the low water level, and he also notes, “And they’ve stocked it now. There’s a few bass in it, redeyes such as that, but there’s not whole lot of them. And the water’s so low, there’s not half the water in the river now as there was when I was a boy.” The Dobbins farm combines Carl’s and his grandfather’s land, totaling over 200 acres. Asked about Riverflow , an intentional community with several homes nearby, including one formerly belonging to Carl’s grandfather, Iva compliments the Riverflow families as being “good neighbors.” Carl points out how the river is only about twenty miles along the road but actually is seventy-five to eighty miles due to all its bends. As far a changes in Iva’s lifetime, she recalls that the Little River used to freeze all winter and people could cross with horses and wagons, but the river doesn’t freeze the same anymore.

The Little River oral history series was directed by the Floyd Story Center at the Old Church Gallery, where the complete archives are held. Carl and Mae Dobbins’ interview was conducted by Radford University students Jessica Hamby and Kelly Schwenk. The project was guided by a collaborative community-university partnership under Radford University anthropology professor Dr. Melinda Bollar Wagner, whose students collected a wealth of place-based interviews. Generations will be enriched by the recordings of all who shared their memories. Thank you all.