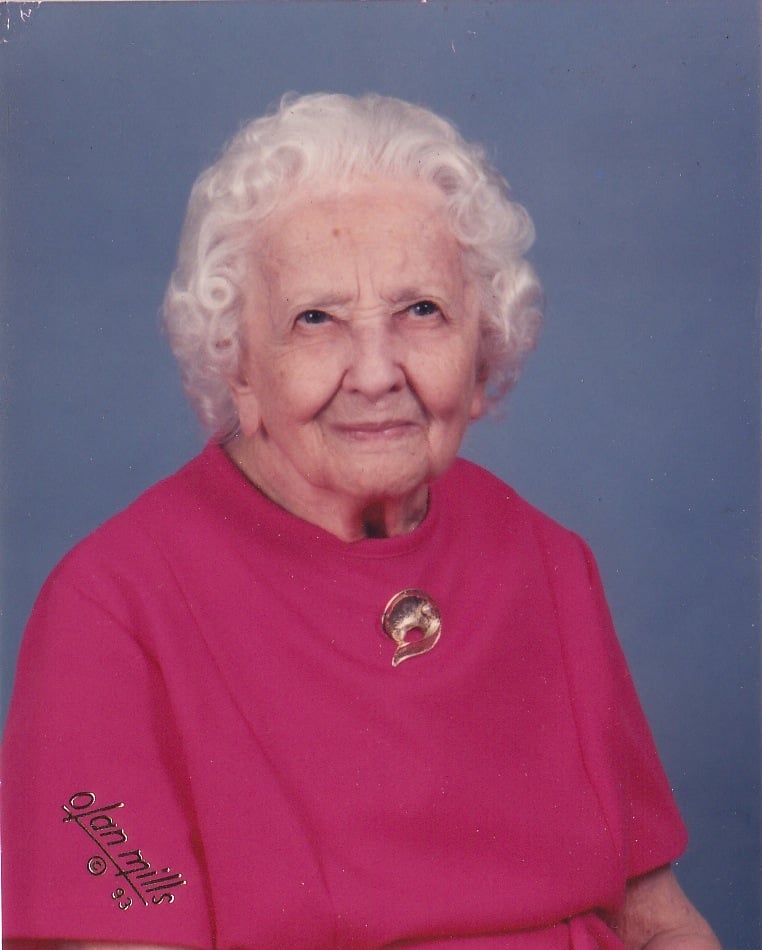 From March 2, 1999 through April 7, 1999 at various times, Kiera McReynolds, a Radford University student, and Kathleen Ingoldsby from the Floyd Story Center, interviewed Arlie Tobler at Skyline Manor Nursing and Rehabilitation Center in Floyd, Virginia. Although the recording quality is poor, and Mrs. Tobler’s voice weak, much local lore is noted.

Mrs. Tobler grew up on a farm with eleven siblings. Her father, Martin Leonard Harman, was a veterinarian, farmer, and carpenter who could “make anything.” She describes helping him with his work as a casket maker and blacksmith, and sewing clothes and outfitting the casket linings with her mother, Cordelia Weddle Harman, and her grandmother.

At the one-room school she attended, Harris School, Burks Fork District, Mrs. Tobler says the thirty or forty students learned the essentials: “reading, writing, and arithmetic.”   She explains how she preserved onions, cooked cabbage and potatoes, made apple butter and sauerkraut, and picked chestnuts and wild strawberries.

Mrs. Tobler was born August 25, 1900, and grew up on a farm with her eleven siblings. Her father was a veterinarian, farmer, and carpenter. She also helped him with his work as a casket maker and blacksmith, sewing clothes and casket linings with her mother and grandmother.

In her youth, Arlie Harman attended the one-room Harris School, Burks Fork District, and later became a teacher at the Union School near Rush Fork.  Arlie married Sherman Tobler, and together they operated Tobler’s country store. Arlie, never one to shy away from work, also helped her husband on their farm.

The Buffalo Mountain Series was directed by the Floyd Story Center at the Old Church Gallery, where the complete archives are held. The project was guided by a collaborative community-university partnership with Radford University anthropology professors Dr. Melinda Bollar Wagner and Dr. Mary LaLone. Arlie Tobler was interviewed at the nursing home by Radford University student Kiera McReynolds; several of Mrs. Tobler’s  relations sat in, along with Kathleen Ingoldsby, OCG staff. Students in Anthropology 411: Appalachian Cultures, and Anthropology 121: Honors Cultural Anthropology teamed with senior anthropology major, Adam Sowder to collect a wealth of place-based stories. Generations will be enriched by the recordings of all who shared their memories. Thank you all.