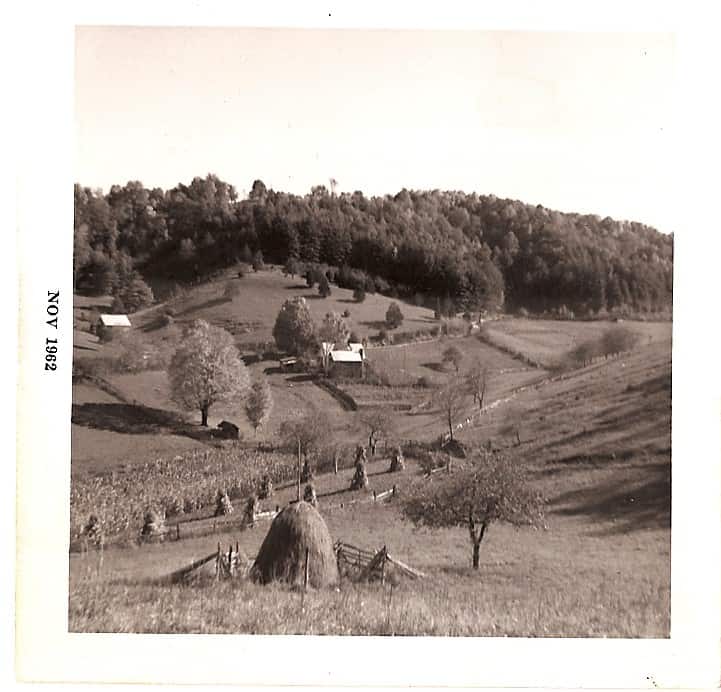 View looking toward the two McNeil homes with a haystack in the foreground. The upper rows of dent (field) corn have been shocked with several more rows yet to cut. A fenced vegetable garden slopes down from the log house. Visible outbuildings include a barn in the upper left and a shaded springhouse downhill and to the left of the houses. Hayfields and pastures are neatly fenced with apple trees dotting the farm.

James Ireson McNeil (1822-1904) built the two-story log house on land he inherited from his father. He and his wife, Lydia Smith McNeil (1827-1883) brought up seven children in the log house. After Lydia McNeil died, James Ireson married a widow, Clementine Mason Boone, who brought her eight children to live in the log house. James Ireson and Lydia’s youngest son, Thomas Benton McNeil, married Florence Aldridge McNeil in July 1894. They began their married life in the log house and reared ten children to adulthood there. In the 1930s, Benton began work on a newer house, which he built closely in front of the log house. He and Florence moved into the new house around 1937 with four of their children. Benton died in 1959, and Florence died in 1967. Their youngest son, Johnny McNeil, inherited the farm and the two houses. He lived there until his death in 2008.

Photographer Robert Walton was one of thirty-three grandchildren of Thomas Benton and Florence Aldridge McNeil.